Home Living In Phoenix Fun Things to do Around Phoenix What’s with the Chandler Ostrich Festival?

What’s with the Chandler Ostrich Festival?

The Most Exciting Event in Chandler? The Ostrich Festival

What’s With The Ostrich Festival?!

What brings so many people to The Ostrich Festival in Chandler every year?  For twenty-seven years, Arizonians have been coming to Tumbleweed Park in Chandler, eagerly awaiting what waits for them beyond the fence. 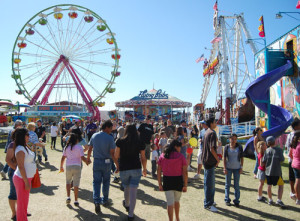 What’s really beyond the fence?  Ostriches?  “What’s so great about Ostriches?” you may ask.  Furthermore, how is it that Ostriches are interesting enough to gather and hold the attention of  Southwest’s denizens for twenty-seven-years strong?

Well, we thought you might ask.  And if you’re new to The Valley of the Sun, you’ll need to be filled in on the Ostrich Festival – that is exists; it’s annual; it lasts from March 7 to March 16; and it’s held in Chandler.

Now, beyond the details, a deeper cognizance of Chandler’s Annual Ostrich Festival is necessary so, if you haven’t been, you won’t miss out before the end of this weekend.  After all, today marks the first day of the last weekend for the festival.

We went to the festival for you – seeking the fountain of attraction.

Into the Ostrich Festival!

The park is vast and green.  Canopies and tents spring out of the grass like a hundred white Nome hats at a garden store.  Smiling faces run around with hot dogs, flavored ice, and prizes.  Your Ostrich Festival map takes you to all the must sees of the festival. 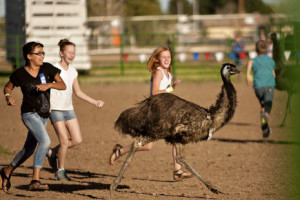 They’re not just celebrating Ostriches here, they’re racing Ostriches!  These creatures are much larger in person than you’d expect them to be.  And they’re funny!  For comical relief, catching these Ostrich Races is something everyone should do!

When you’re hungry, there’s no lack of choice.  But you may not have too much time to sit down and eat with everything that’s going on.

In the Family Fun Zone!
Duck Racing! The kids can actually race ducks.  It doesn’t get much cuter than that!

Shark encounters, Wild Animal Tiger Shows, and hilarious Survivor Family Game Shows – where contestants are chosen from the crowd and participate in “immunity challenges”. Family Magic Shows will seize your attention while the magician and his assistant have a blast with the audience.

Speaking of live performances, the allure of the Ostrich Festival lies heavy upon the live performances.  Popular Southwest local and regional musicians, dancers and performers alike draw in the masses at every showtime.

Tonight, you can see EmbeR.  She’s a young girl, who  proactively used the internet to self-teach herself to play guitar.  EmbeR does a spectacular job covering popular music like Taylor Swift, Pink, and Katy Perry, just to name a few!

In addition to Pony and Camel rides, and farm animals at the Petting Zoo, now is your chance to see famous Las Vegas bird show acts that feature Eagles, Cockatoos, Emu, Parrots and even a Condor with a 10-foot wingspan.  These “bird-stars” that have appeared on David Letterman, Animal Planet and The Tonight Show will fill you with information and amazing facts all while showing off their wild features in a free-flying avian exhibition!

Perhaps the most unique and interactive attraction is the Water Balls where riders can walk on water inside an air sealed giant hamster ball!  This attraction is complete with a large rectangular pool. All day, Everyday.

If you’re into adrenaline, head for the Bungee Trampoline!  This multi-station Super Trampoline system enables you to jump over 2 stories high while performing gravity defying, flips and somersaults!  There are four stations, so everyone can have a chance.

Put simply, the Chandler Ostrich Festival is much more than Ostriches, and doesn’t disappoint.  This is the last weekend, so check it out and post comments and pics below!